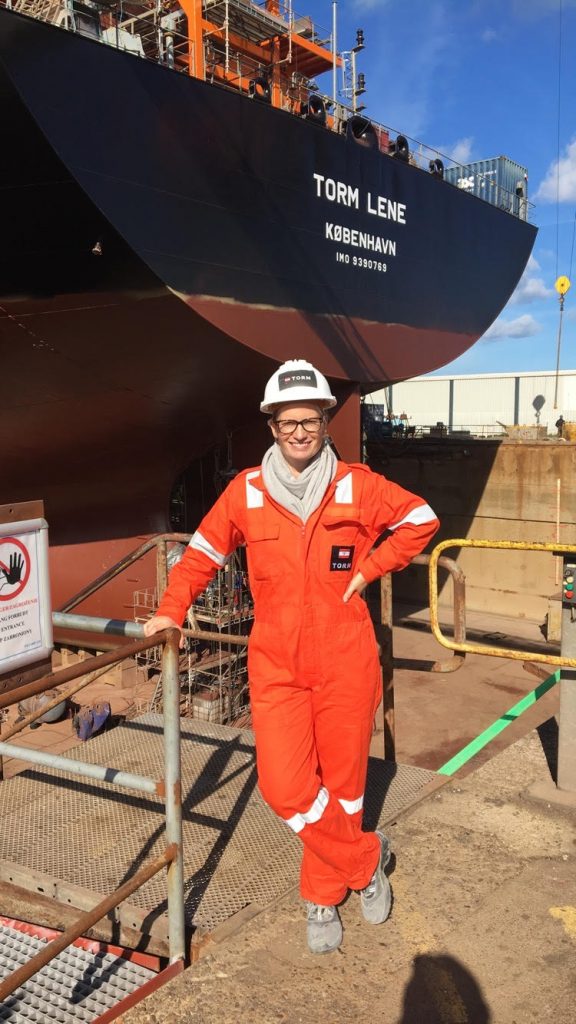 Danish operations manager Liv Kjaer is concerned that the shipping industry is lagging several years behind other sectors making the best use of electronic technology. Fortunately, at a personal level, she finds herself in an environment where intelligent systems are appreciated and put to good use – both in her senior position at a leading product tanker specialist, and in the advocacy of modern techniques which is core to the world-renowned Blue MBA course in which she enrolled in September 2021.

Ms Kjaer is enthusiastic about the benefits of advanced systems in her work as a senior operations manager with Torm A/S, which runs a much-admired product tanker fleet carrying gasoline, naphtha, diesel, and jet fuel.

So far, the shipping industry generally has failed to embrace fully the opportunity to adapt business processes to digital technologies, worries Ms Kjaer.

“From my experience I see the shipping industry being at least ten years behind the digitalisation happening today in several areas,” she says.

“Vessels are only just now getting fully online with live chat functions and video calls, and we still have paper bills of lading in three originals – originating from back in the days when these were transported by horse, pigeon post or at sea – why have these not been digitalised across the industry but only in some trades?

“We live in a world where most people can use an iPhone, so I’m still wondering why we are not seeing more iPads and tablets being used on board for documenting technical matters, reporting timesheets, or connecting ship and shore.

“From an operational perspective, a large focus area is exactly the connection between ship and shore, and the need to align expectations away from old prejudices where it was shore only that gave orders in one direction – today the learning is in both directions and the crew on board must be recognised as being valuable as the operations and chartering department.

“So how can we improve learning and optimise our voyages and how can digitalisation help us? I’m not the expert in this area, but there is room for improvement, and I don’t see why new systems should not be used to help us in this direction.”

Already a practitioner of important elements of this digital revolution, what attracted Ms Kjaer to sign up for the Blue MBA?  In answer, she refers to a favourite character from Swedish literature.

“I tend to live by the Pippi Longstocking quote ‘How can I know that, when I’ve never tried?’ and on top of that strive to continuously move ahead instead of standing still (or falling behind) – I’m ambitious and have from the start been pushed into trying new things and always doing my best.”

(Pippi Longstocking is the heroine of stories by the author Astrid Lindgren, and never lets anything get her down; she is enterprising, free-spirited, and kind, one of the original role models for what is sometimes termed ‘girl power’).

Specifically, Ms Kjaer says: “I’m at a point in my life where I’ve been doing operations in shipping for more than 15 years, the last eight as a senior operations manager in Torm – I’ve two kids, got married and built a house, so the next step for me was simple – I had to pursue new challenges to keep myself moving forward. I completed a mini-MBA in 2016 which gave me a taste of what a real MBA could give me in the long run.

“The Blue MBA was the right choice for me; I had a chance to dive further into an industry that really interests me, expand my network among the top professionals in this industry and use my expertise from the past 15 years to give something back to a company that has invested so much in me (now also with this MBA).

“I must also admit that when choosing between a ‘regular’ MBA vs the Blue MBA, since I have no real leadership experience, I found that the Blue MBA would give me more day-to-day challenges which I could relate to, and again the network that I can now already benefit from.”

How does she feel that pursuing the Blue MBA programme will support her ongoing career?

“I have an ambition to become a female leader in this industry and to show that despite shipping being male-dominated, there is also a need for female leaders and role models for the next generation to come. I hope and expect that this Blue MBA will give the competences and confidence to climb this ladder and achieve my goal. The Blue MBA is my step towards the next job-title.”

She is an advocate of advanced support systems such as VIP (maritime software provider Veson’s IMOS Platform), of which she is a “super user” meaning that all related commercial challenges, upgrades, testing of new features, and attending Veson courses are an essential part of her job.

For the last eight years she has been commercially responsible for the VIP support system at Torm. “I support our worldwide operations departments in using the system correctly and getting the most out of it, and ensure it is customised to the needs of our organisation. The super user role also requires that I have a certain curiosity in learning new features and examining the existing ones to optimise the system to our needs.

“The system is only as good as the input it gets – so it’s up to our commercial team to get the right data into the system,” she underlines. “The system is then capable of handling the data in various ways and providing valuable output at the other end. For example, a daily workflow would be for the chartering department to run calculations for a voyage of a particular vessel; once fixed the voyage budget is then passed on to the operations department so that it can process the entire voyage. During the voyage, the vessel reports daily data into the system such as speed, performance, estimated times of arrival etc.

“Further all port disbursement accounts, voyage-related invoices and other financials are being handled on such a single voyage. Once a voyage is complete, the system now has an enormous amount of data that can provide statistics for future voyage budgets, how to optimise vessel performance, time management on a voyage and so on. There is almost no limit to the amount of data we can pull from the system as we operate a fleet of more than 80 vessels which performs more than 600 voyages a year.”

The system also connects numerous stakeholders on a voyage – from chartering calculating the voyage budget, to operations executing the voyage, to planning crew changes based on data from the vessels being integrated in the system, to the technical department arranging spare parts and vessel visits based on data input from operations received by the customer to bunker replenishment arranged by the bunker purchasing department to the vetting department planning Ship Inspection Report (SIRE) inspections* and so on. The operations department is the key manager of the system and responsible for validating the input so that the output for the various stakeholders is reliable and usable. The system is the foundation for commercial data collection in the company.”

*The Oil Companies International Marine Forum (OCIMF) plans from the second quarter of 2022 to overhaul its SIRE programme by introducing tablet-based inspections, a more comprehensive inspection process, and enhanced procedures to provide more meaningful insight. This will require a ‘change in mindset’ from industry, OCIMF contends.

Ms Kjaer says: “For an operations manager, no two days are alike and handling the operations of several vessels requires a lot of post-its and to-do-lists to make sure things are not forgotten. Stakeholders must be informed in a timely way and budgets must be adjusted correctly.

“The VIP system is my ‘wingman’ in my job, it’s a place where I can create a reminder to prepare a freight invoice for the customer prior to the ship reaching the final destination on its voyage or where I can have automatic reminders whenever a vessel calls at, for instance, West Africa to make sure all operators across the company inform our security department, so we are well prepared both commercially and on board the vessel.

“I can also update the status of a port so that the crewing department can confirm flight tickets for the next crew to board or search for historic port expenses based on all our previous calls at a particular port.

“When I started as a trainee I had a notebook, where I would write all these things to keep for later – but today the system allows us to share knowledge across the world, so whenever I call a port unknown to me, we have previously-collected data in the system which can guide me on what to be aware of – it is like a safety net in my daily job. We also use it as a checklist for new colleagues in the operations department, so they are aware of our procedures.”

Ms Kjaer trained with Clipper Tankers, Copenhagen, a company which these days is part of MOL Chemical Tankers, Copenhagen, and she later became an operations manager with Nordic Tankers (USA) LLC, Stamford, and managed that company’s largest contract of affreightment for the trans-Atlantic trade and the operation of several parcel tankers in the Caribbean. She moved to Torm in January 2014, where she has intensified the all-round commitment so vital to her command of IT capabilities today.

PrevPreviousThe 50 Inspiring Champions of the Blue MBA Class of 2023 – Meet Jacob Heinricy Jensen
Next“I WANT TO LEAD INNOVATION AND DRIVE NEW WAYS OF THINKING.”Next
We use cookies on our website to give you the most relevant experience by remembering your preferences and repeat visits. By clicking “Accept All”, you consent to the use of ALL the cookies. However, you may visit "Cookie Settings" to provide a controlled consent.
Accept AllAccept NecessaryReject AllRead More

This website uses cookies to improve your experience while you navigate through the website. Out of these, the cookies that are categorized as necessary are stored on your browser as they are essential for the working of basic functionalities of the website. We also use third-party cookies that help us analyze and understand how you use this website. These cookies will be stored in your browser only with your consent. You also have the option to opt-out of these cookies. But opting out of some of these cookies may affect your browsing experience.
Necessary Always Enabled
Necessary cookies are absolutely essential for the website to function properly. These cookies ensure basic functionalities and security features of the website, anonymously.
Functional
Functional cookies help to perform certain functionalities like sharing the content of the website on social media platforms, collect feedbacks, and other third-party features.
Performance
Performance cookies are used to understand and analyze the key performance indexes of the website which helps in delivering a better user experience for the visitors.
Analytics
Analytical cookies are used to understand how visitors interact with the website. These cookies help provide information on metrics the number of visitors, bounce rate, traffic source, etc.
Advertisement
Advertisement cookies are used to provide visitors with relevant ads and marketing campaigns. These cookies track visitors across websites and collect information to provide customized ads.
Others
Other uncategorized cookies are those that are being analyzed and have not been classified into a category as yet.
SAVE & ACCEPT
Powered by